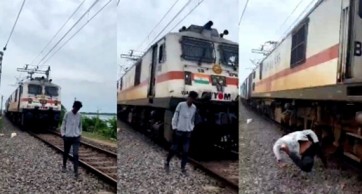 Hyderabad, Sep 5 (IANS) The craze to shoot a video of him walking close to a high-speed train nearly cost the life of a 17-year-old youth in Telangana.

The youth was injured when he was hit by the train from behind as he was walking very close to the track near Kazipet Railway Station in Hanamkonda district.

The video of the incident went viral on social media. With his hands in pockets, he is seen walking along the track with a train approaching from behind. In a couple of seconds he was hit by the train and was thrown aside. His friend, who was recording the video on a mobile phone, is heard warning the youth before he was knocked down.

Chintakula Akshay Raju (17) sustained grievous injuries and was admitted to the MGM Hospital in Warangal. A resident of Vaddepally village of Hanamkonda district, he is an engineering student.

While walking with his friends along the railway track near a pond, he came up with the idea of capturing the high-speed train in a video to upload on a social media platform. However, the craze nearly cost him his life. He suffered grievous head injury and also injuries to his leg and hand.