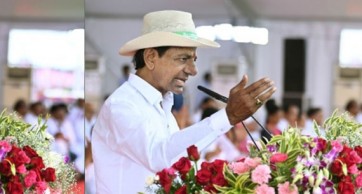 Hyderabad, Sep  (IANS) Telangana Chief Minister K. Chandrasekhar Rao on Monday predicted that a non-BJP government will definitely come to power at the Centre in the next elections and assured farmers that it will provide free electricity to farmers across the country.

Rao called for sending the BJP home in 2024. He urged people to back the slogan for "BJP-Mukt Bharat" and elect a democratic and secular government.

Addressing a public meeting in Nizamabad after inaugurating an integrated district collectorate complex, he, terming Narendra Modi government anti-farmer, said it was not ready to spend 1.45 lakh crores to provide free electricity to farmers but looted Rs.12 lakh crore in the name of Non-Performing Assets (NPAs) and loan waivers to corporates.

Claiming that Telangana is the only state in the country supplying 24 hours free electricity to farmers, KCR announced when a non-BJP government comes to power, this will be extended to the entire country.

He slammed the Modi government for not buying agriculture produce from the farmers, not ensuring remunerative prices, and for conspiring to capture the lands of farmers.

"The BJP at the Centre has been selling everything like airports, ports, banks and industries. Now there is conspiracy to grab the lands of farmers," he said.

The Chief Minister said under BJP's rule unemployment has increased in the country and rupee has fallen to a record low. Nothing has been done for Dalits, weaker sections and women, he added.

He alleged that Modi is only busy in toppling the opposition governments in states.

The TRS leader said with the blessings of people he would be entering the national politics. He said a beginning would be made from Nizamabad.

KCR called for debate on what is happening in the country and for an awareness among people. He said the BJP government which was fueling religious madness and hatred must be sent home.

"Should we allow the nation burn in the flames of religious madness. Do you wish to see water flowing in the canals or the blood. Do you want to see crops or the blood drops," he asked and urged the Indian farmers to ponder.